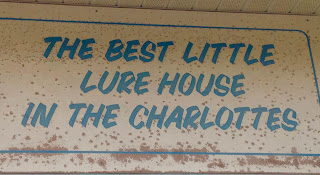 Haida Gwaii
On a calm July morning at 3am we departed Prince Rupert in the dark for the very intimidating Hecate Strait, and Rose Spit shallows at the entrance to the Haida Gwaii Islands. Hard to  imagine the Haida people making this same crossing in dugout canoes with no GPS or Radar! From the little harbour at Sandspit we crossed over to Queen Charolotte City marina where we tied the boat off and drove north to the old town of Masset. At the Copper Beech House we were greeted by our host Chelsea, and settled in for a hiatus from the ocean winds. This is writer Susan Musgrave’s house as evidenced by her prolific writing collection and eclectic artistic decor. Every object from Haida bentwood boxes to plastic headless dolls adorned the walls. With fellow travellers Phil and Stacey from Prince George, we were treated to one of Chelsey’s gourmet salmon dinners, and entertained with stories of poet/writer Stephen Reid’s bankrobber days. A memorable hike up the Towhill Trail led us on a winding boardwalk up to an amazing view of Rose Spit with its ribbon of white sand beach on either side. Packing up after an early breakfast we met the great lady herself, Susan Musgrave, sharing anecdotes and stories like the wonderful storyteller she is. 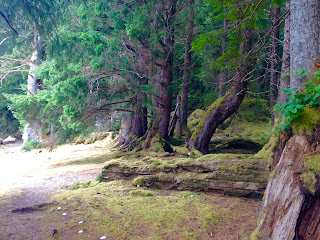 Back on Chantey V the stage was set for the passage south to Gwaii Hanas National Park, where we anchored off Skedans. Entering by dinghy at the village site, our ‘Watchkeeper’ Jessica, a Haida native, toured us through the historic moss-carpeted village. Once almost thirty longhouses and more than fifty frontal and mortuary poles faced out to sea. Today the totems are decaying in the grass and the grounds are eerily silent, but the spiritual quality of the forest and an almost mystical quality pervades the site. “How’aa Setlana”, our Watchkeeper called out as we said goodbye…I believe it translates ”Blessing of the Gods”. We visited two other villages on route, K’uuna Llnagaay and SGang Gwaay, a Unesco World Heritage Sight. A hurricane had ripped through SGang Gwaay in 2018 and unfortunately much of the site had been devastated. Before departing Gwaii Hanas we spent two nights at Rose Harbour, an old whaling station. A wee guest house made of cedar planks and clay bricks from the whaling station lies nearby. Natalie took our lines and welcomed us to join her and a kayak tour group for a homemade dinner from her lush garden. Gooeyduck ravioli and salad. Surprisingly tasty! Late that evening we got a knock on the stern. It was Natalie with a gift of yam fries and red pepper jam. A little Haida Gwaii hospitality!
Gale force winds had passed over as we lay hunkered down in Rose Harbour, so with a break in the rain and winds, we decided to get outta Dodge and brave an overnighter across Queen Charlotte Sound to Vancouver Island, an overnight passage 170 NM south. 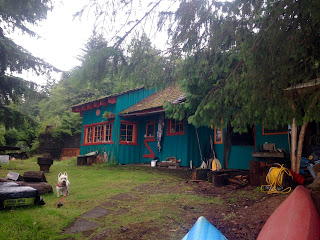 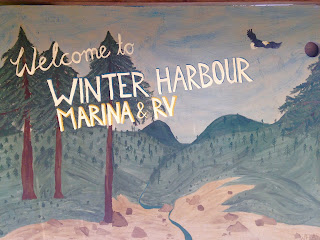 Posted by Cathryn and Daragh on SV Chantey at 8:20 AM No comments:


Posted by Cathryn and Daragh on SV Chantey at 2:51 PM No comments:

Thanks to Steve and Vicky on Tango we managed to pump Freon into our refrigerator and now we won’t be living on Spam for the remainder of the trip! From here we crossed the rock-laden, appropriately named, Peril Strait. As we neared the West Coast a wall of fog rose up to meet us, making the narrows and the pass quite treacherous. Fish boats loomed out of the fog ahead of us at every turn. As they say up here, “ In Alaska we don’t tan, we rust!” At the far side we entered an expansive, picturesque bay with a snow-capped volcano in the background, Sitka Harbour. Hundreds of fishermen were readying themselves for the season opening. Oddly, everyone wears gum boots year round, locally referred to as ‘Alaskan sneakers’. The town appears quite prosperous with a thriving tourist industry due to its’ beautiful setting enshrined by towering mountains, and its’ unique Russian history.


A few days later we set course for Goddard Hot Springs only to find the auto pilot had disconnected. A few hairy hours of bobbing around in the rollers later, Daragh managed to reconnect the tiller arm and we were off again.

The hot springs proved to be a delightful spot. Clean spring water gushed from a tap into a man-made pool in two little wooden huts with views of the ocean. After a good steamy soak we were ready to move on.

Sitka to Hydaburg:  Close Encounters of the Canine Kind!

It has been a trying few days after being eaten alive by black flies at Tenakee Springs and Appleton Cove, and enduring heavy fog off outer Prince of Wales Island. But the real terror was waiting for us in beautiful Warren Bay. We sailed in under clear skies to a perfect crescent of white sand. Whales were frolicking in the waves as we dropped anchor. The problems began when we attempted to dinghy ashore and were almost flipped over by the incredibly large breakers on shore! I settled with Georgie in the sand while Daragh braved the breakers alone to try to get the dinghy to a better location at the far end of the beach, where we could get off again later in the day. As I sat on the beach it dawned on me that we were not alone. To my horror a pack of six young wolves appeared watching me tentatively from the creek bed fifty meters away. I knew if George spied the pack he would go mad with barking and things could go very badly for us both.So  I slowly put us both back in our life jackets for protection and very quietly started moving down the beach to the water’s edge, bear spray in hand, my heart pounding in my chest! After what seemed like an eternity we reached the dinghy. I called out to Daragh, “ Wolves, a pack of wolves!” To which he replied, “don’t worry I’ll get your gloves later!”.

Fog! A complete white-out of mist surrounded Chantey as we crept out of the bay at daybreak. Visibility was only fifty feet and was socked in for the duration of the day. So our eyes were glued to the radar the entire trip.

At the tiny hamlet of Craig we were one of the few pleasure craft in the fleet of fish boats preparing for the Seiners opening day. After provisioning we followed a sign to Shelter Cove Resort. We were pleasantly surprised to meet our hosts Dave and his wife who run a beautiful five-star fishing lodge and restaurant here and stayed for dinner.

'Summertime and the living' is easy,
The fish are jumping'
and the weather is fine,
Your Daddy's rich
and your momma's goodlookin'
So hush little baby
don't you cry.'

Posted by Cathryn and Daragh on SV Chantey at 6:56 PM No comments:

The most beautiful thing we can experience is the mysterious.
It is the source of all true art and science.”
Albert Einstein

Setting a course for Hoonah, a small Tlingit native village across the strait from Glacier Bay, we arranged a pit stop to meet BCA members Tony and Coryn Gooch on their Nordic Tug. A tasty halibut supper and numerous sailing stories later we bid farewell and prepared to cross Icy Strait early next morning. 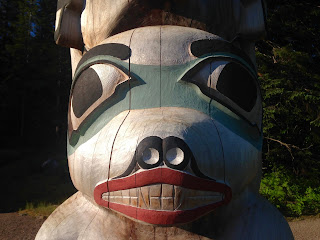 And so we arrived at Glacier Bay National Park and World Heritage Site. If ever we needed a place to intrigue and inspire us, this is it. Just 250 years ago Glacier Bay was all glaciers and no bay! Today fewer than a dozen tidewater glaciers remain. Sequestered at the head of the inlets, these glistening  jewels flow from soaring coastal mountains to the sea where they calve great shards of ice into the ocean below.  The occasional cruise ship passes by in the distance but otherwise we are left in peace with the eagles, seals, sea lions and sea otters. The sea otters are particularly amusing as they float along, belly up, like heaps of soggy teddy bears!


Our first night we checked in at Bartlett Cove dock headquarters for our pre-reserved four day pass and then dined at the Lodge with the goal of cruising up to Blue Mouse Cove and on to the Reid Glacier. Although in recession, the glacier is impressive enough ringed in meringue-topped peaks. But what really captured our attention was the size of the paw prints we spied in the sand as we hiked to the edge of the glacier! A large bear and cub had been this way only a short time before!  From Reid Inlet we spent the following day exploring John Hopkins and stunning Margerie Glacier. The latter one of the few to still be tidewater, dropping off into the sea below. Kaboom! As we watched the glacier began calving off huge blocks of ice into the ocean. The inevitable fog was rolling in so we decided to make a move and head back to the safety of our anchorage. On our last day in the bay we started the long trek back and stopped for lunch at an idyllic cove beside Willoughby Island. Suddenly we heard the sounds of a blowhole! Three Humpback whales were lolling and diving leisurely in the shallows nearby, flukes skyward. A perfect conclusion to to a fine day. 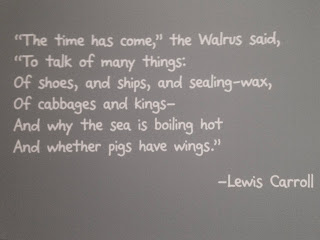 A brisk sojourn back down the Icy Strait in big seas and we slipped into the shelter of Funter Bay for the night. On the floating dock we met Kris and John on SV Monarch and their black lab pup Boomer, from Sitka, Alaska. Kris invited us aboard for a seafood curry made with their fresh caught Spot prawns and crab, and related tales of life in remote Kodiak AK on at the tip of the Aleutian chain.

Turning north with a following wind up the often treacherous Lynn Canal, we aimed the pointy end towards Haines and Skagway. The mountain scenery here is becoming quite stunning with immense snow-clad peaks on either side of the fiord. Dropping the hook in William Henry Bay we were pleased to see our buddy boats coming in behind us. G and T’s with glacier ice were chilling with an impromptu drinks party aboard Nimue.  As we chatted a large brown rock started moving across the beach! A lone grizzly was foraging for his dinner as dusk settled over the inlet. 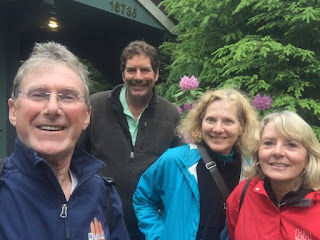 Haines to Skagway
The Burough of Haines with its’ incredible panoramic views of the Fairweather Mountain Range, is a hidden gem in the Alaskan hinterland. Only a few cruise ships stop here so the atmosphere is still one of a peaceful fishing village. Plenty of history in these parts with the old Fort Seward and the gold rush fever of times gone by. John and Marian decided to fly in on their darling little red float plane ‘Lucy’ and we spent the day strolling through the town under a cloudless blue sky. A weather window presented itself  and knowing how the winds can whip up in the channel we took to the sea and  cruised into Skagway under full sail next morning.

Posted by Cathryn and Daragh on SV Chantey at 7:55 PM No comments:

Where are we now ? Click to InReach us on Google Maps

Cathryn and Daragh on SV Chantey
Victoria, BC, Canada